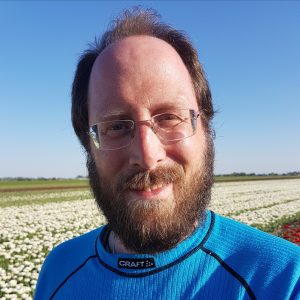 I have been drawing my whole life, and I told whole stories about it to my mother as a child. However at a young age, I also came into contact with computers, which meant that the drawing faded a bit into the background. After graduating from Open Studio in Amsterdam (modern media, video and sound), I became a web designer. Later I also followed the training for sound engineering at the Sound Academy in Hilversum. After that I worked as a sound technician for SuperSens in Amsterdam.

After a trip through North America with its impressive landscapes and because the electricity went out, I discovered drawing again! And all painting lessons that were taught to me at the Waldorf school came in handy again, and because of that I have a good command of the colour palette. As a result, I also made a lot of abstract work in pastel chalk in deep saturated tones. But for the variety I also experimented with ceramics. And these have become objects where light and movement play a role.

However, I do not have much to say about what I make. Because this is still a quest that has not yet been crystallised. I also do not feel like a “real artist” although I always have to be creative, whether it’s painting, drawing, ceramics, or digital. I am a real autodidact, although I have looked around what kind of art I like and together with my mother I did many colour exercises as a kind of an apprenticeship.

Atelier de Toekomst uses cookies. A cookie is a small file that is sent along with pages from this website and / or Flash applications and stored by your browser on the hard drive of your computer, mobile phone, smartwatch or tablet. The information stored therein can be sent back to our servers on a subsequent visit. Read More